The Samsung Galaxy Chromebook is a beautifully designed 2-in-1 notebook for above-average users. The thin bezels, the 4K screen, and the great specs speak of a machine designed for both work and play.

An S-pen has also included, with the grey, sleek exterior is a beautiful sight. It does seem like this will be able to hold its own against the competition. However, do the specs all translate to great performance? Let’s dive deeper to find out. 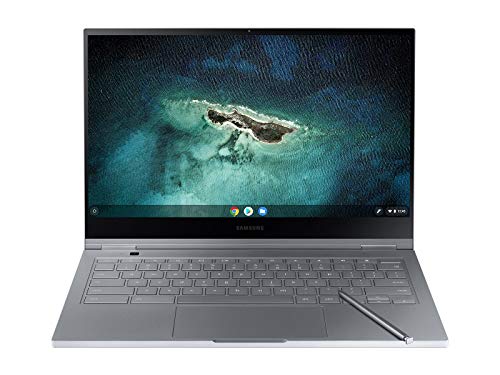 Samsung’s Galaxy Chromebook is on sale right now, and is down nearly 30% from its original price. It’s even more of a bargain than it was when it came out. With a 10th gen Intel Core i5 CPU with integrated UHD graphics, and 8GB of RAM, that’s not a bad package. Plus, there’s 256 GB of storage. There’s unfortunately only one configuration.

However, there is a customization option; the color. You can go for the sober silver, or the popping red. Both look sleek, and both radiate its power and capabilities.

Samsung’s always been one of the best designers in the world. Its smartphone screens are used by Apple for its iPhones after all.  The Samsung Galaxy Chromebook is no different. It catches the light at various angles and creates a range of shades. The red version specifically balances against the silver trim around the edges.

The thin bezels have already been mentioned, but they warrant a repeat, since they go so well with the overall aesthetic. They remind one of the Dell XPS line of laptops. The bottom bezel, though thicker, doesn’t impede the viewing experience.

The Chromebook is also very light and small, even for a 13-inch laptop. It’s just a hair lighter and thinner than the MacBook Air and the Google PixelBook Go. It obviously also beats the Dell XP3 13.

Finally, the Galaxy Chromebook can also turn 360-degrees an convert into a tablet. You also have a great stylus to work while kicking back. However, the hinge on the Chromebook could be a bit stronger. It does wobble a little.

The Galaxy Chromebook promises some great performance, and that’s due to the excellent hardware inside.

As with most keyboards, here the keys are just alright. The keyboard reminds one of the shallow butterfly switch keyboards which were once common in Macs. This is a definite gripe, but it’s not a deal breaker.

The touchpad is fast, responsive, and smooth. Two-finger scrolling registers just fine and three-finger gestures are just fine. There’s nothing to complain about here.

The S-Pen, just like in the Note series of smartphones, adds a little to the experience. You certainly don’t require it as a necessity, but it’s great to have. It comes in handy during presentations, for sure. You can use it to transition forward or backward, zoom in and out, and even use it as a laser pointer.

The best experience with the S-Pen is when you use it with the laptop in tablet mode. Otherwise, you’ll notice the wobble of the hinge, as mentioned earlier.

The Samsung Galaxy Chromebook has two USB-C ports which can be used for data transfer and charging. The headphone jack and the volume switch are on the left and the microSD slot and power button are on the right.

After you click on the rectangular button on the side however, you’ll realize that it’s the housing for the S-Pen. This little stylus can be popped in and out very easily.

The audio on the Galaxy Chromebook is absolutely fantastic. You can hear everything clearly from another room, provided it’s not soundproofed. The sound is clear at maximum volume too, however, the bass is probably a little slight.

The Galaxy Chromebook has two cameras. The first is the webcam with a 1-megapixel resolution. That’s just function, and does video calls just about as well as the competition. This is an area where most laptops fail unfortunately, while the smartphone competition is miles ahead.

There is a sharper, 8-megapixel sensor on the top left corner of the keyboard however. It’s designed for taking photos in tablet mode. It definitely takes better quality photos than the webcam. However, don’t expect smartphone quality photos out of it.

The display of the Samsung Galaxy Chromebook is gorgeous. The thin bezels of the Chromebook really help bring out its beautiful colors and sharpness. The 13.3-inch 4K AMOLED panel really shows off what great technology Samsung has up its sleeve. You can watch YouTube, Netflix, Amazon Prime, Disney Plus, and whatever else you can plug in with ease. 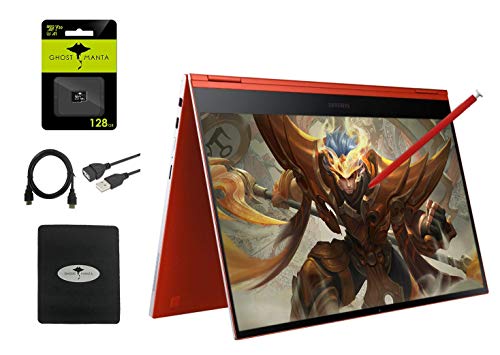 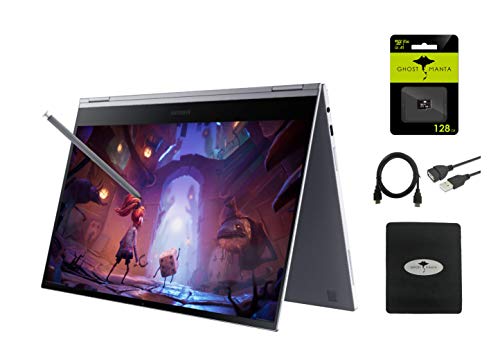 Now for some stats. Colorimeter tests show that the Chromebook produces 224% of the sRGB color spectrum. That blows the competition out of the water. The Pixelbook Go and the Dell XPS 13 could both only manage a 108%. The MacBook Air went a smidge further with 113%. This is no surprise since Samsung is known for producing brilliant color screens.

As for brightness, the display disappointed a little with its AMOLED rating. Scoring just 357 nits, its score came below the 368-nit Pixelbook Go, and the 386-nit MacBook Air. When measured for the OLED display brightness test however, it scored 536 nits. That score absolutely destroys the competition.

The touchscreen on this display is almost as pleasurable to use as it is to stare at the screen. Any taps give an accurate response and drag and drop, zoom, and pinch gestures all work great. The similar performance of both the touchpad and touchscreen when browsing is a great bonus. You don’t have to choose.

The Samsung Galaxy Chromebook’s stats translate in the real world and give some great performance. Speed multitasking, beautiful colors, very few frame-rate drops, etc. all make this a great package. You can have several YouTube tabs open and playing videos and not skip a beat.

This is perhaps the only deal breaker for some. Since there is a 4K screen on this moderately sized Chromebook, it eats battery. It delivers 6 hours of battery life when browsing 1080p videos. In contrast, the PixelBook Go made it to nearly 12 hours when put through the same challenge. The laptop also gets a little warm for comfort since it’s pushing all those pixels at once.

The Samsung Galaxy Chromebook is a great machine that pumps a lot of power into its performance. However, the poor battery life may dissuade some from buying what is otherwise an excellent 2-in-1 mobile device. The light weight, the beautiful screen, and the wealth of features on this machine make it a contender on a huge list.